rickyfrank.com
My Story
Part 1: The Beginning 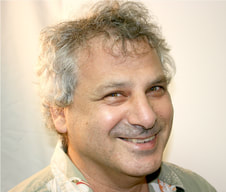 I first enameled as a child, sifting colors onto pennies and assorted stamped shapes, and firing them in a small electric hot plate kiln. That hobby lasted for about a month; I was much more interested in sports. I loved running, jumping, and climbing trees. I enjoyed science and had a chemistry set, a microscope, and a dissecting kit. competing, and playing with any kind of ball. I lived next door to some "woods" and spent much of my time outdoors by myself.
​
My only other early art memory was when I attempted to teach myself to paint with oils. Working from a photo, I painted a portrait of my younger sister. My brother laughed at it, my sister cried, and my mother suggested that maybe I should put the paints away and do something else.

In high school, as a part time job, I helped out in my father's electronic instrument business. I worked in our basement, bending and soldering the tiny wires of thermocouples, as I listened to rock and roll. My mother complained that he was spoiling me; I would never want to have a REAL JOB! She was so right.  It wasn't until I graduated from college (B.A. Psychology) that I renewed my interest in art. Pulling my hobbies from a closet ﻿in my parents' basement, I began enameling in my spare time while I worked as a referee for high school soccer. It took little skill to fire a piece and watch beautiful colors emerge, so it was difficult to FAIL. And it was FUN!

At this very impressionable stage of my career, I went to a local craft show and saw the beautiful cloisonné  jewelry of Gael and Howard Silverblatt. I was blown away. Never had I imagined that the same glass powders that I was playing with could be made into something so exquisite. I had never seen REAL enameling before. I decided that one day I would make a cloisonne enamel piece as beautiful as what I saw at that show. I became committed to teach myself to enamel and become an enamel artist. I moved back into my parents' basement, set up a studio, took a few classes in New York City, and began making Cloisonne´jewelry with a passion.  I also worked part-time as a Junior Varsity Soccer coach at my old high school in Rye, NY, where my former soccer coach, Lou Gallo could mentor me. I worked like this for several years, going back and forth between soccer and enameling, knowing I needed to make a commitment but not sure what I wanted my career to be.

Part 2: My Struggle to become an Artist

Although I felt passionate about enameling, I lacked both a design sense and a vision. My family upbringing gave me a great work ethic and I was a good problem solver, but "feelings" were a foreign language to me. I grew up shut down emotionally, wanting to be a "good boy"and do the right thing. I still felt passionate about sports, and while coaching high school soccer considered that as a potential career path. But I knew I needed the creative element in whatever I did. In 1984, after going back and forth between enameling and coaching for 8 years, I made the decision to give up trying to make it as an enamel jeweler. I packed my bags and headed for nearby Carrollton, Ga, to study Sport Psychology and apply my creative energy towards helping children in youth sports develop positive self-images, confidence, and creativity.

Little did I know the changes which would take place at West Georgia College in Carrollton, GA. The head of the Psych Department, Mike Aarons, had been a protege of the famous humanistic psychologist, Abraham Maslow, and his specialty was Creativity. I ended up spending three years studying Peak Performance, both in sports and in art. I looked at creativity as another type of peak performance.  Because I had grown up with parents who never spoke about feelings, I had learned to shut down my feelings (excitement, sadness, anger, etc) and had become skilled at being "good", whatever that meant.  With the encouragement and support of my teachers I was able to begin the process of discovering "Who I Am". I studied my own creative process, discovered the feelings pushed deep down over the earlier 30 years, and began my path to make EXPRESSIVE art. It was kind of like self-directed art therapy  as I used my enamels to help learn about my feelings.

Towards the end of my time in graduate school, I had the humbling experience of having to count the pennies I saved in a jar because I was broke and needed food from the grocery store. I had the epiphany that I really should be applying the knowledge I had gained about self image psychology to myself.  I decided to create a new goal and called it "Making the change from starving artist to affluent artist"!
Part 3: My Struggle to make a living as an Artist

One of the primary elements in my Sports Psychology training was learning about "Goal-Setting ". I began to set financial goals for myself, and visualized myself with piles of money floating over my head as I smiled happily. I decided on a goal of selling $40,000 of my work, Just picked it out of the sky. It was much higher amount  than I ever had imagined I might sell. I figured if I even came close I would be happy. This started a process of setting other types of goals. If I was to sell $40k, I needed to MAKE at least that much work. I needed to be in my studio for a certain amount of time to make that much. I had to wake up and get into the studio just to meet the time requirements.  And I needed to find venues to sell it. And I needed to have a display and vehicle to travel to those venues.

You get the picture. To make a long story short, I sold within $100 of that $40,000 goal! Tried it again the next year; picked a challenging goal of $70,000 in sales. I was still naive enough about business so that I didn't think about the concept of "profit", but still, those were pretty high numbers for a starving artist!. End of the year: again within $100 of my $70,000 goal! And so I was on the path of considering the business side of my artwork, which continued to grow as I entered the wholesale marketplace. I learned to wear several hats: artist, designer, salesman, marketer, office manager, and more. One of the keys turned out to be accepting these roles, and knowing which one needed to be done at any specific time. Twenty years later, it's still a juggling act, but I now have the confidence that "I can do it"!